Xiaomi is set to launch the flagship Mi 9 four days from now, and in the lead up to the grand announcement, the company has been teasing fans with bits of information about the phone. The company has now surprisingly revealed detailed information about the Mi 9’s triple rear camera setup, alongside camera samples to highlight the individual sensors’ capabilities. The company has also given a sneak peek at the Mi 9’s display, highlighting its thin bottom bezels and has also showcased the upcoming smartphone’s space grey variant.

Earlier today, Xiaomi’s official Twitter handle shared a bunch of camera samples clicked using the individual sensors in the triple rear camera setup. Apart from highlighting the sensors’ capabilities, the images also revealed the details of the sensors such as the resolution, aperture value, and pixel size among others. The main sensor has been revealed to be a 48-megapixel unit that employs the 4-in-1 Super Pixel technology – something that is commonly called pixel binning – to extrapolate the 12-megapixel count to an effective 48-megapixel resolution. The size of the sensor will be 0.8 micron with f/1.75 aperture and a 6-element lens configuration.

The secondary camera is a 16-megapixel ultra-wide angle sensor with 117-degree field of view (FOV), f/2.2 aperture, and auto-focus support. It has a 6-element lens setup, 1.0 micron pixel size, and employs what Xiaomi calls a ‘closed loop motor’. Xiaomi claims that the ultra-wide angle camera supports 4cm macro photography, which means the camera can lock focus at a distance of 4cm from the subject and capture more detail. Xiaomi co-founder, Lin Bin, revealed in a Weibo post that the sensor utilises an anti-distortion algorithm.

The third camera is a 12-megapixel sensor with a telephoto lens that supports 2x optical zoom with 1 micron pixel size, f/2.2 aperture with autofocus and again a 6-element lens configuration. Selfies, on the other hand, will be handled by a 20-megapixel front camera with AI beautification features onboard. Additionally, the company has also revealed that the triple rear camera module is protected by a layer of sapphire glass that is claimed to be extremely durable and resistant to scratches. 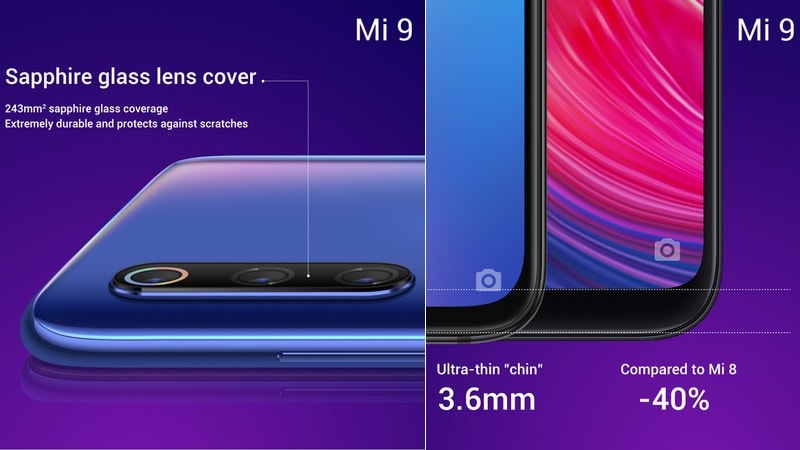 The official Xiaomi Facebook account has also revealed that the Mi 9 comes with Laser Autofocus technology, which utilises a combination of PDAF and CDAF. Additionally, the Chinese smartphone-maker has also shared that the Mi 9’s chin is just 3.6mm thin and is reportedly 40% slimmer than the one on the Xiaomi Mi 8.

Furthermore, Xiaomi co-founder Lin Bin has shared an image of the upcoming smartphone’s space grey colour option flaunting a glossy finish. Xiaomi has so far showcased the Mi 9 in three colour options – a pink gradient model, a blue gradient version, and now the space grey variant. Xiaomi has already confirmed a few other important details such as Snapdragon 855 SoC powering the flagship and the presence of an in-display fingerprint sensor. All that remains now is for the company to officially unveil the smartphone at an event on February 20, 2019.